Did you miss Cami Bohórquez's talk as part of the Spinning Futures 2050 project? Don't worry, we summarize it here.

This year, within the framework of the initiative Art + Data Future Abrelatam, comes Spinning Futures 2050, a proposal of ILDA in which Datasketch participates. It is oriented to understand embroidery and textile art as another form of knowledge to interact with data, information and think about the future.

On Saturday, March 5th, we joined in the celebration of the International Day of Open Data and presented the inaugural talk: Futurology and Prospecting. Ph.D. Cami Bohórquez, professor of Organizational Strategy for ten years at the Universidad de Los Andes and expert in complex social systems, gave it.

Here is the talk recording (es), you can activate the English subtitles. Anyway, if you don’t have time to watch it, we make you a summary.

What did we talk about?

Cami’s proposal was an approach to futurology, understood as the process of imagining futures based on present evidence. It seems obvious. However, there is an epistemological discussion about whether futurology is an art or a science.

It is said to be an art because it requires a lot of creativity, and sometimes its claims cannot be tested or are disastrously proven false. It is also a science because organizations use it as strategic foresight to prepare for possible futures based on evidence, trends, and statistics. 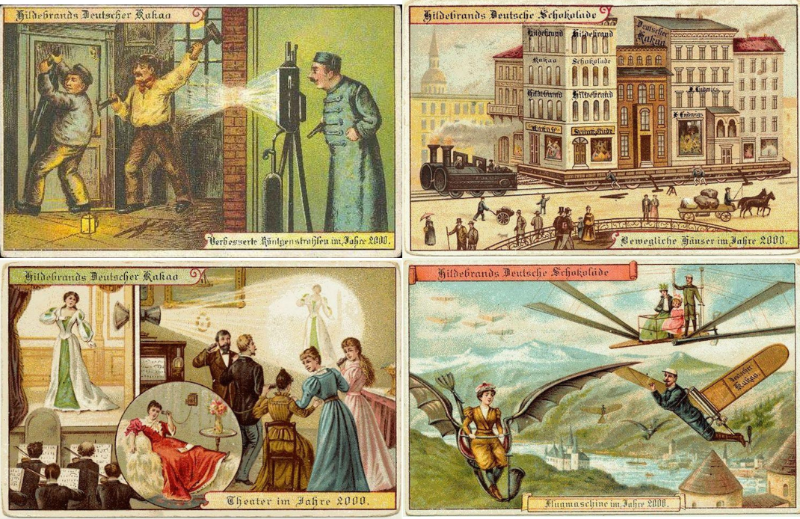 In 1900, the Hildebrand Chocolate Factory (Germany) launched an advertising campaign for the Paris World’s Fair. It sold its chocolates with an illustrated postcard imagining the future in 2000.

Regardless of whether it is art or science, the truth is that futurology is now a part of our society. Previously, science fiction had the most significant impact. Jules Verne is one of the most famous futurologists. He was right in several projections of the future in the 20th century: the trip to the moon, giant squids, and nuclear submarines. 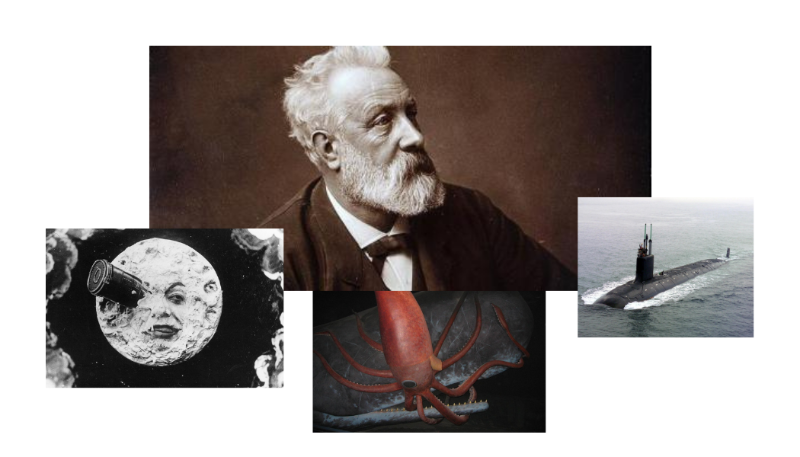 Other examples we can find in the literature are George Orwell’s 1984 or Aldous Huxley’s Brave New World. We have Isaac Asimov’s prophecies about the computerization of the world, connected networks of and with thousands of computers, and a universal encyclopedia of immediate access for all humankind as more recent examples that have been fulfilled. We are getting closer and closer to having intelligent systems, robots, cybernetics, and artificial intelligence. Elon Musk, for his part, wants the dream of living on Mars, a world with inexhaustible sources of energy for all, to be fulfilled.

Black Mirror, a series available on Netflix, proposes a dystopian world that highlights bioethical dilemmas where, for example, it will be possible to transfer the consciousness of a body to an object or a machine. Will it be possible? 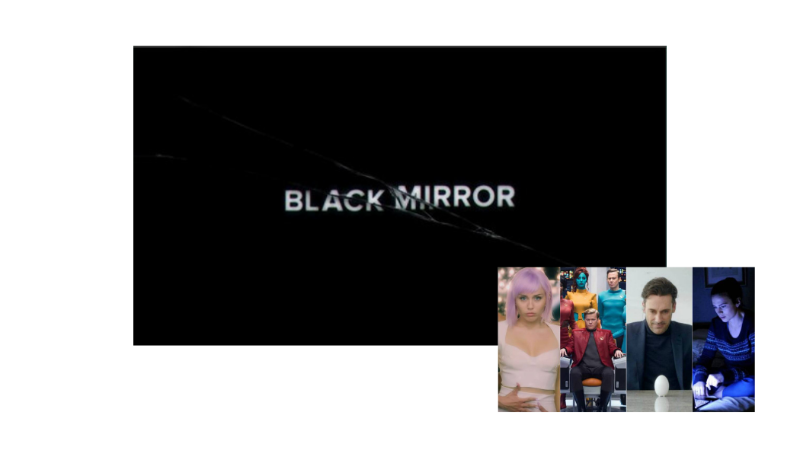 Outside of literature and audiovisual production, we find futurology concepts, such as statistics, in strategic planning.

Cami Bohórquez explains that we can anticipate and prepare for possible futures through linear regressions, non-linear regressions, and prospective models used in all industries. This preparation, in this case, is firmly based on historical data to see possible trends.

Following this idea, as a creative exercise for the Spinning Futures workshop - or also to do futurology in our projects - he recommends that we avoid covering all possible spaces. On the contrary, he points out. It is better to choose two or three points where we can project ourselves.

To give us an idea, we could ask ourselves questions like these: what will our bodies, our food, and our homes be like in 2050; what would happen if a particular technology is developed; for example, the transfer of consciousness, as explored in Black Mirror or in Altered Carbon, where a global elite becomes immortal. But, of course, this sounds very dystopian, so we are rooted in reality and will think about the future from the present data.

Cami Bohórquez shared predictions based on open data. We compiled some of these trends obtained from the World Bank, The BBC, and The Bank of the Republic. 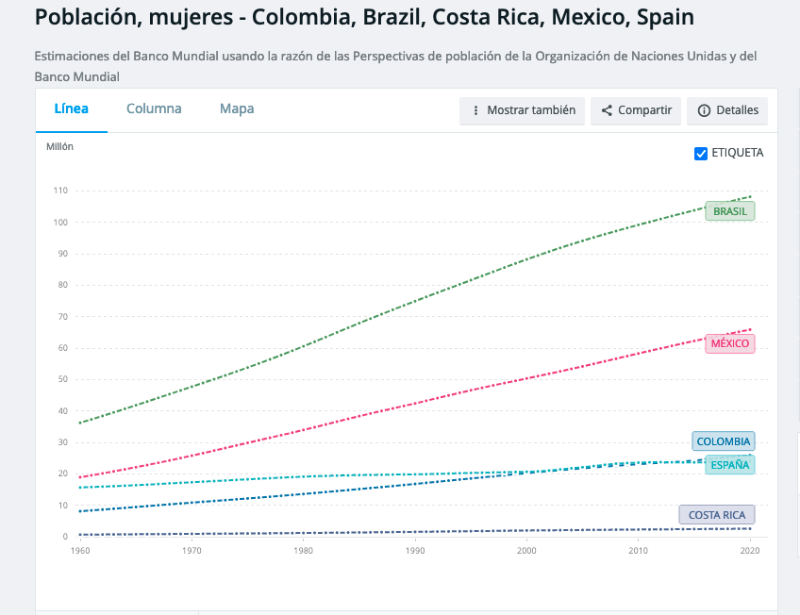 We took data on the population trend of women in the Latin American countries participating in the Spinning Futures 2050 event - Colombia, Brazil, Costa Rica, and Mexico - together with Spain. From them, we see, on the one hand, that the population of women in Colombia today is more significant than that of Spain. But on the other hand, the vast majority of women born in the Latin American region are located in Brazil. So what could this mean for our future? Or, better yet, what does it imply for our present and how this may impact years to come. 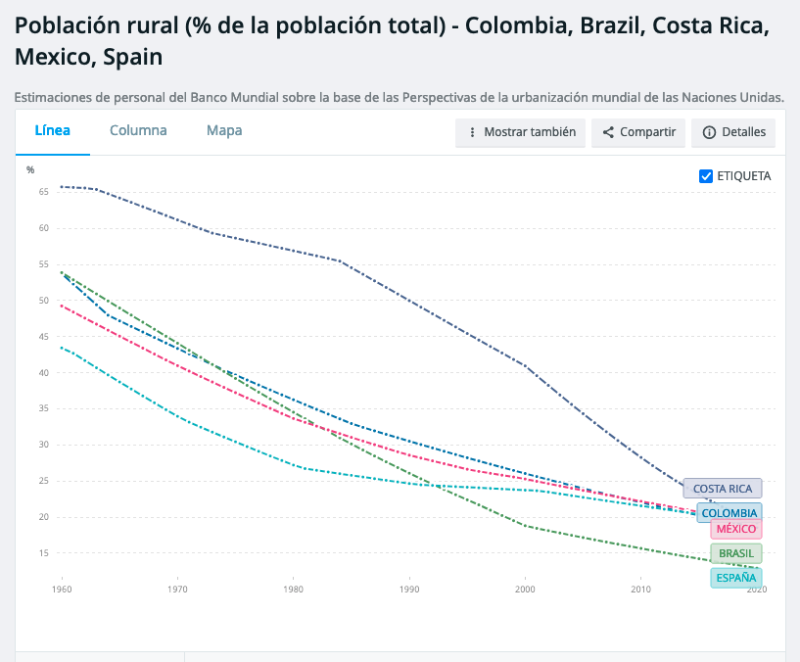 We see the same countries as the previous graph, but we analyze rural population trends. Although the population is increasing significantly, the rural population is decreasing. Therefore, we infer that our cities will be more extensive, with high population density and deserted rural countryside. So, what will happen to agricultural activities, the peasant movement, and territorial struggles? 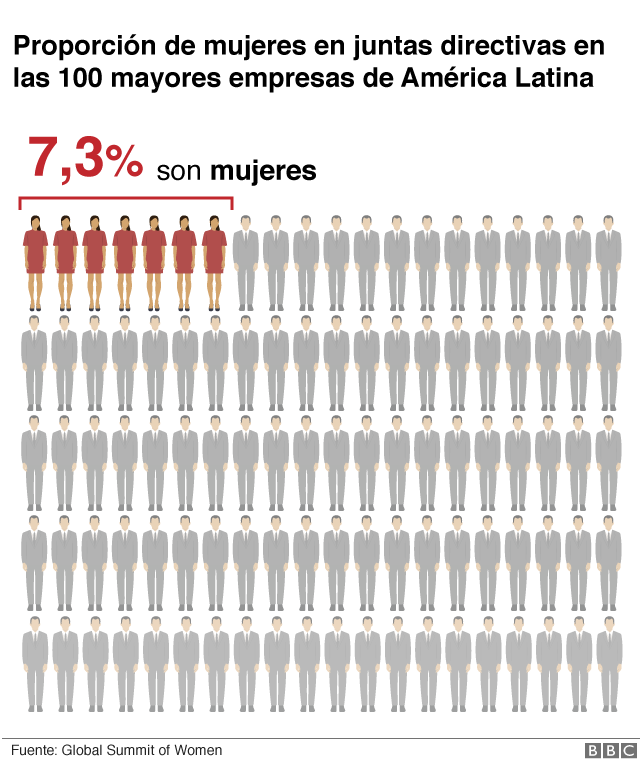 This graph shows the proportion of women on boards of directors in Latin American companies. We could infer that there is a trend towards excluding women in these positions of power. However, it must be recognized that before 1932 there were no women in management positions. Women did not even have economic rights. Although the outlook is not encouraging, we are much better off in economic rights and equality than 70 years ago.

We believe that futurology does not necessarily tell us what will happen, but it poses possible scenarios for action and creates a kinder, more promising, and possible future. So considering the future from the open data of the present is fundamental for decision making - from the most personal to those involving public investment. So is the constant examination and questioning of which present decisions will change our future.