In the fifth issue of our Data Journalism newsletter, we announced the #30DayMapChallenge 2021 in November. We look at the maps that stood out, what topic they addressed, and how they visualized it. 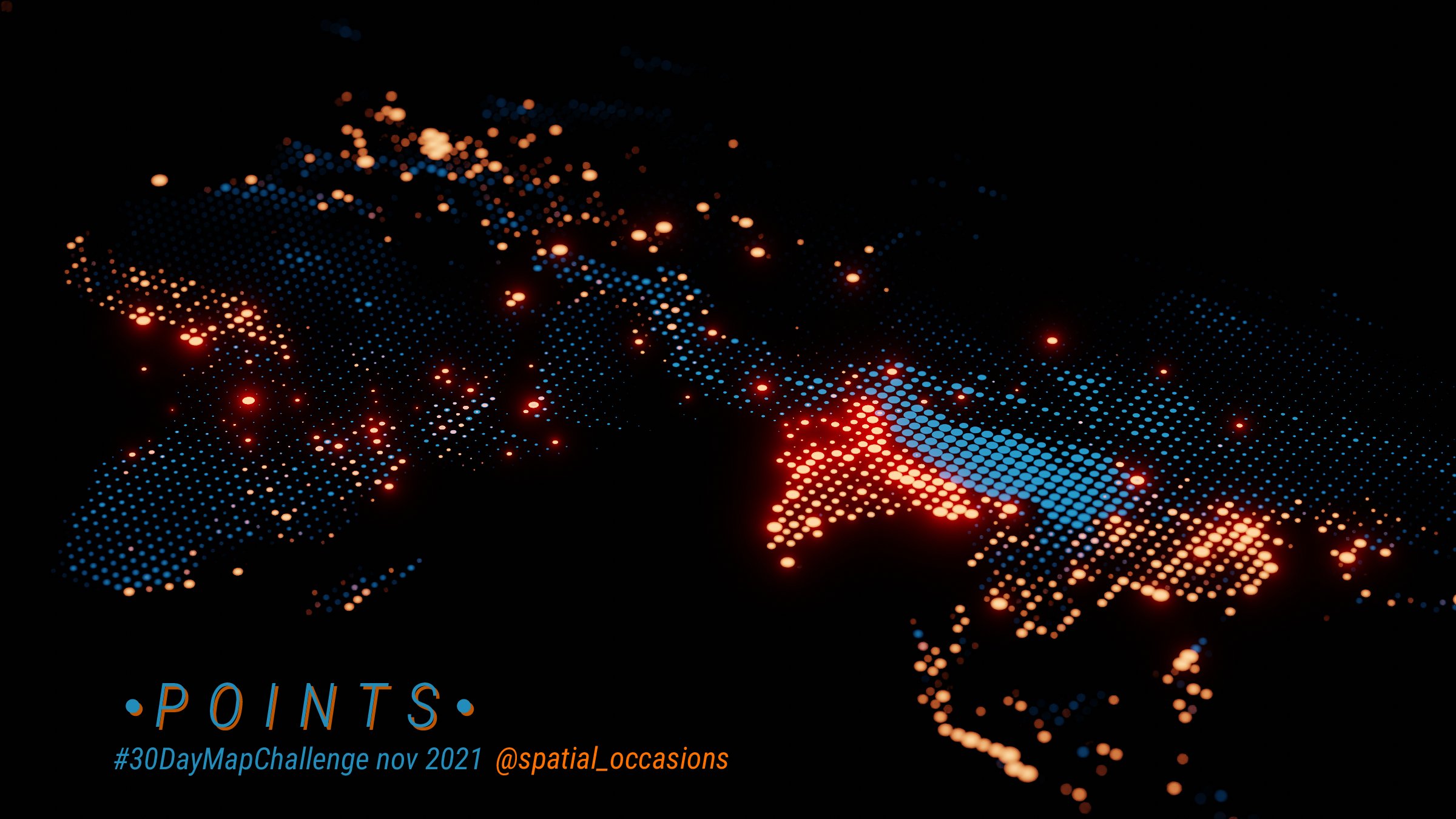 Topi Tjukanov, a Finnish geographer, created the #30DayMapChallenge running through November since 2019. Each day of the month corresponds to visualization types or topics. The categories deal with maps in various shapes and colors, choropleth, and heatmaps, including population, land, water, boundaries, etc. Then each participant decides how to carry them out.

Niu Haifeng created a repository on GitHub of the maps that participants made this year. Each category has a table of the most popular posts, with the most liked posts on Twitter. Topi Tjukanov and Antoni Barja implemented the official challenge website from this work.

The page has the 15 most popular maps per category. So, with 450 maps in total, it is challenging to select the best ones. We could evaluate the maps by criteria considering each visualization scope, creativity, complexity, innovation, or popularity. Still, due to the great reception of this challenge, we would have had to work for months.

Maps are essential visualizations for storytelling, and with this challenge, we can find inspiration. We don’t need to be data science experts to make maps or enjoy them. For now, we hope this is a taste of maps from the 30 Days of Maps Challenge 2021.

We present a selection of maps that we liked and meet some of the criteria we mentioned. Of course, we will not appreciate many specific maps without their context, so we chose those that covered the entire planet or one or more continents.

Criticism of the Mercator Projection distortion - a cylindrical cartographic projection tangent to the Equator - is a current issue. Neil Kaye demonstrated with a video the distortion by comparing the correct size and shapes of the countries.

Animating the mercator projection so countries and territories are correct size and shape in relation to each other.#dataviz #30Daymapchallenge #worldisnotflat #day28 pic.twitter.com/968GSBepA1

The spatial_occasions account debuted with elevation (in blue) and population (in red) points in Africa, Eurasia, and Oceania. Its design is electric and looks like a photograph.

With the shipping movement in the Arctic, Carl Churchill managed to obtain the outlines of Russia, Canada, Greenland, and the Scandinavian countries.

#30DayMapChallenge (Monochrome) This is my favorite day of the challenge, and believe it or not this entire map is 1 dataset, and 1 color. Simply by tracking #Arctic shipping, we can see the outlines of continents and islands. pic.twitter.com/6YpI6DxFIu

Blake Robert Mills made a map of the shapes of major cities according to their streets using OpenStreetMap. Although we do not know the methodology for such a selection, this map shows 21 cities with comparable data. In addition, Robert Mill based the color palette of this visualization on Gustav Klimt’s Portrait of Adele Bloch-Bauer II.

Here is my map for Day 5 of the #30DayMapChallenge using @openstreetmapdata. Visualizes the shape of major cities by showing their streets, highways, and other roads.

Robert Mill also used color palettes of works of art for the “reconstruction” of buildings and streets of Pompeii (The glorification of the Barbaro family) and the map of cycle lanes in major cities (The Birth of Venus by Botticelli). About cycle lanes, in Datasketch, we made a t-shirt (es) and a tote bag (es) with the map of cycle lanes in Bogota, Lima, Rio de Janeiro, and Mexico City that you can buy in our store.

In general, we can highlight the work of Helen McKenzie. Her maps were quite ingenious and popular. One of them was a three-dimensional bar chart of the population along the Nile River.

Population along the Nile in Egypt🗺️#30daymapchallenge #day11 #3D #blender pic.twitter.com/7NFhVGyoW9

It does not hurt to see how McKenzie represented the world population by 1-degree longitude bands.

The moon’s population could not be left behind. So Peter Larson made this unexpected visualization that may be left for the record of the not too distant future.

For the day dedicated to heatmaps, Jill Hubley made a map of corn production in the mainland United States with candy corn. Brilliant, even because of the colors.

for today's #30DayMapChallenge (prompt: heatmap) I looked at corn production in the US - just the lower 48.
data from https://t.co/7K1kHhgewo
made with candy corn. pic.twitter.com/Hzq3fdwuCc

Some people relate the Globe to oranges. With this fruit, we learned about the Earth’s projections. The orange could not be missing in this event: Jonas Nelson demonstrated how the Earth would look like if it were flat for the category “The Earth is not flat”.

#30DayMapChallenge Day 28, The Earth is not Flat. Draw a simplified Earth on to an orange, then peel it and try to flatten it. Q.E.D. pic.twitter.com/GtsiLT7n0P

We recommend exploring the categories of maps made with “new tools” (Day 14), “without computer” (Day 15), or “interactive” ones (Day 25). You may find some surprises, such as this game, in which you must go to a point in the world to make friends using your nose.

For the Interactive Map Day 25 #30DayMapChallenge, I've collaborated with @recifs, @mootari on @observablehq to build this fun game! Using #TensorflowJS and #facemesh, you have to use your nose to match places around the globe. Happy Thanksgiving Map Day! https://t.co/BogM22Z3Qn pic.twitter.com/w9ttQ8cwaQ

Last but not least, memes usually accompany shared life experiences and from which this challenge has not been able to get rid.

Oh yeah I am considering adding this to my CV #30DayMapChallenge pic.twitter.com/bYgHQUhRxs