We cover the panel "Participatory and Transparent Governments,” which kicks off three days of reflection and debate within the framework of Latin American Cities in Action 2021 -CILA 2021. 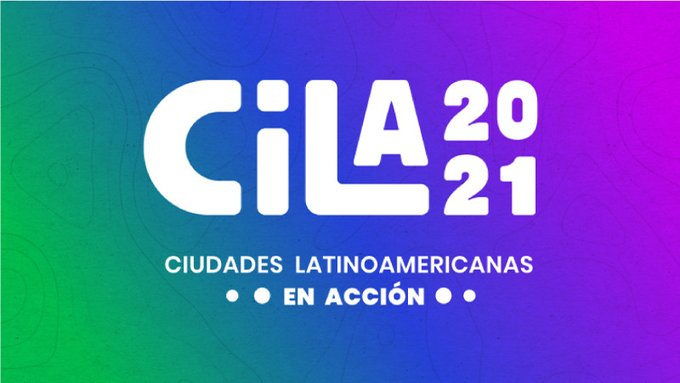 CILA 2021 is a virtual space for regional exchange organized by Ciudadanía_Inteligente and Asuntos del Sur. Various actors interested in openness, transparency, gender focus, and sustainability share their experiences and lessons learned to respond to governance and public management challenges.

It is divided into three themes or challenges addressed through panels, working tables, and virtual stands, which allow sharing and discovering regional experiences: Transparent and Participatory Governments, Gender, Diversity and Inclusion, and Environmental Democracy and Sustainable Cities.

The panelists answered multiple questions related to democratic governance in Latin America and the Caribbean - LAC, the impact of the pandemic in terms of transparent and participatory public policies, and the steps that must be taken to achieve effective democracy and a democratic agenda in the region. 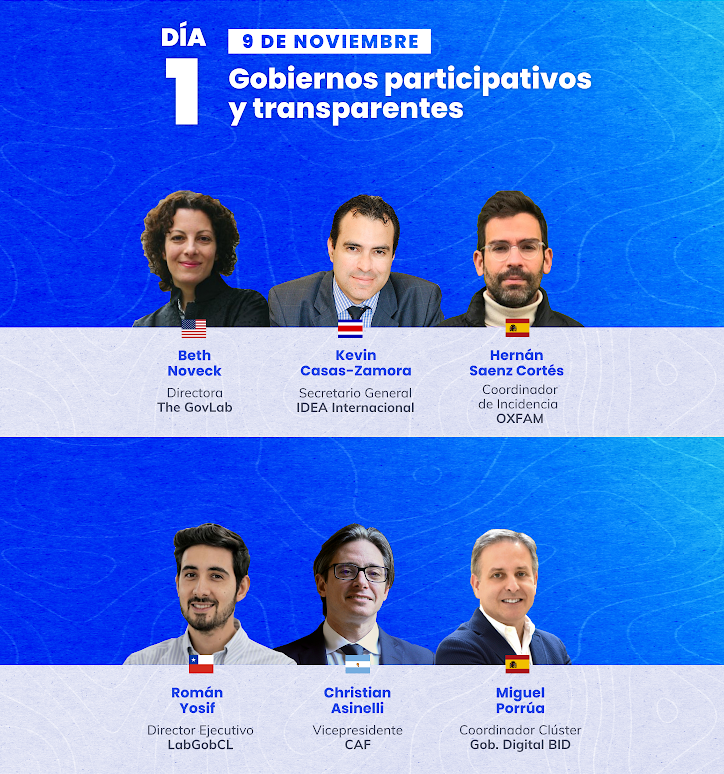 Democratic Governance in Latin America and the Caribbean

Christian Asinelli (CAF) points out that democratic governance exists, but challenges are still overcome. He stresses the importance of generating comprehensive democratic agendas, but focuses on each characteristic of cities and environments. When talking about how to solve public problems and cross-cutting issues such as digital transformation or climate change, he invites not to “bring recipes, but to understand the contexts that allow reflections with different actors with the needs of each region or city.”

Hernán Saenz Cortés (OXFAM) points out that it is difficult to talk about democracy together. For him, what each state understands by democracy should be put on the table, and it should be verified that the model is still valid for current realities and contexts. According to Saenz, people trust in democracy, but it does not govern for all, nor does it consider the differences between the gaps and the social contracts.

He points out that it is necessary to discuss power disputes, who wields power, how they benefit from it, and what brings people to the streets. “In LAC, there is alternation in power, the institutions work on paper, but they must be improved.” To illustrate the above, he gives the recent social movements in Chile, which have led to a constituent assembly and shows that democracy requires substantial changes in the region as it has been understood so far. 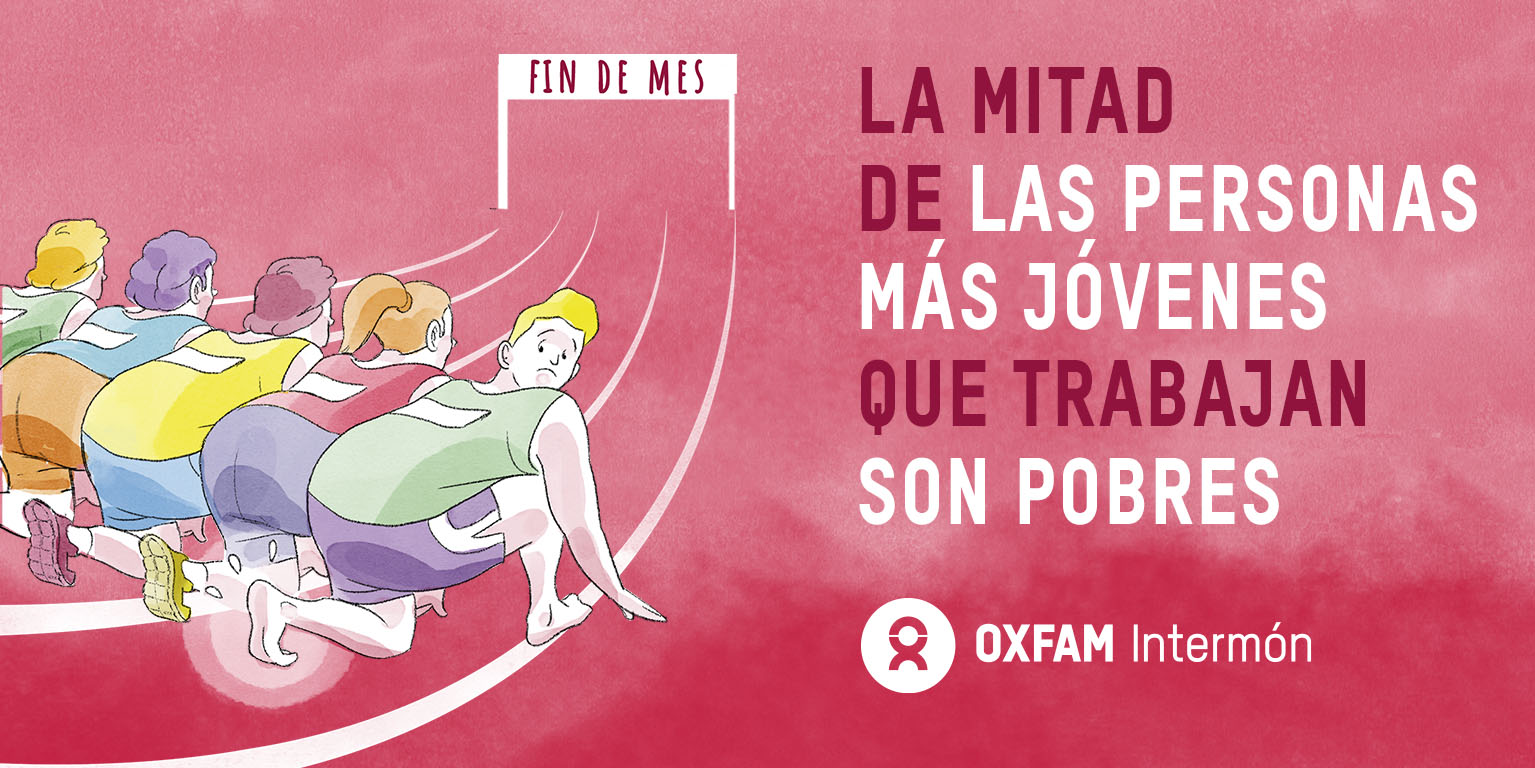 Roman Yosif C. (Government Lab) indicates that the governance of the future has to do with “putting the focus of the construction of all policies on people”, both those who receive the policies and those who deliver them. For Yosif, when it comes to providing solutions to citizens' problems and governing, it is necessary to have a diverse vision and multiple disciplines in more horizontal work teams. In this sense, he points out that government laboratories have a vital role in making decisions based on evidence, focusing on the implementation of concrete innovations that generate legitimacy.

Beth Simone Noveck (The GovLab) points out that short and long-term challenges mainly affect discriminated communities. She notes that people have understood the need for governments to respond to these challenges, although it is sometimes easier to identify and highlight mistakes than good practices. She emphasizes that governments have been entirely responsible for carrying out policies to stop the pandemic and other diseases, such as Ebola, thanks to mutual help, with and for citizens, and that these actions should be taken as an example to generate new policies to help the community.

Kevin Casas (IDEA) points out that democratic governance has to do mainly with the capacity of political systems to receive and respond to citizens' needs. “In LAC, there are parts that work well, for example, holding elections, which is the route par excellence for citizen demands to be heard.”

However, he stresses significant deficits in other areas, such as institutional design, which allows presidential systems to coexist with fragmented, weakened, and polarized party systems, complicating decision-making. In his view, political and social dialogue instruments do not work either, as there are no institutionalized forums or adequate processes to receive and respond to citizen demands in a transparent and timely manner. 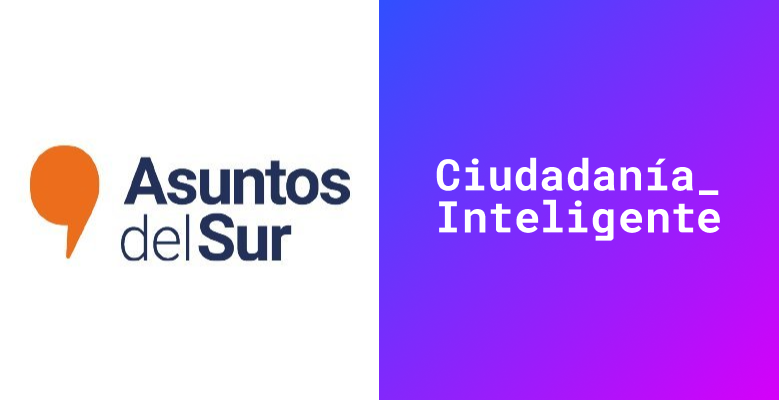 Regarding the impact of the pandemic on societies in the region, Asinelli (CAF) pointed out that city and thematic agendas are now intersecting with the new post-pandemic normality. Previous capacities drive the response to public problems. Countries are facing new challenges, and some permanent ones, such as the lack of connectivity in the region, have become more acute. He compared the current moment of the pandemic with the Colombian post-conflict, in which although there is a symbolic date of closure or end, many of the actions to make it effective have come and will come later.

Hernán Saenz Cortés (OXFAM) indicates that the health crisis has highlighted and exacerbated issues occurring in the world and that were already happening before. All this at a time when democratic trust and satisfaction are at their limit, as civic spaces are being closed and inequalities are widespread. He pointed out that thanks to the pandemic, there have been many connections at a global level with logics of community contacts and joint work that positively changed the culture and philosophy.

However, he pointed out that a large percentage of the Latin American population lives in repressed social contexts. Before the pandemic, there were large protests in the world, which were affected by Covid’s prevention measures, but which are exploding again now and the repression towards them. In addition, vaccination data are very low in the region, which strongly strains democracy. There are cases such as the Gate Vaccine, a lack of health investment, and fraudulent contracting.

Kevin Casas (IDEA) also talks about how Covid “sharpens traits and accelerates processes” and how traditional problems, such as lack of trust or corruption scandals due to emergency purchases, have been enhanced. However, he notes that, for participation, the pandemic has activated notable civic activism, especially given the widespread circumstances for closing spaces. “There is a revival of civic activism, which is not minor news.” He points out that the region tends to have very active civil societies and has been sharpened. He gives an example of what has happened in Chile that has led to building a constituent with far-reaching political transformations. He also emphasizes the renewed interest in digitalizing institutional processes, leading to changes that favor transparency and “hopefully serve to catalyze these processes in which the region is lagging.” 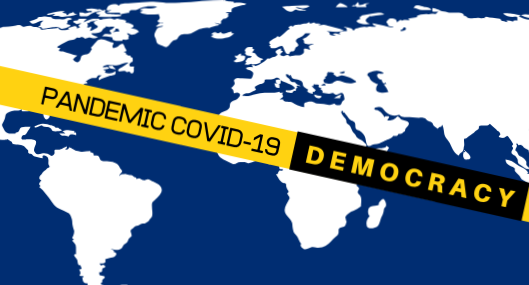 Beth Simone Noveck (The GovLab) points to the relevance of data in the management of Covid, how the pandemic highlighted the importance of data to solve public problems and how this situation can help in the standardization of data as a tool to provide services and improve their delivery to citizens. He stresses that the pandemic has put at the center of public administrations tools to collaborate and work as a team, to coordinate and organize processes, as well as to share reliable information, ask citizens what information they need.

Steps towards effective democracy and a democratic agenda

Regarding the steps that must be taken to achieve an effective democracy, Christian Asinelli (CAF) emphasizes that the role of participation is critical. The new dynamics will allow for projects and programs in which everyone feels part, in which not only governments will be the ones to propose public policies, but there will be other actors who will have spaces for dialogue. He also points out how the CAF-Development Bank of Latin America can contribute to the agenda, especially in cities and municipalities, based on the needs of each territory and space.

Hernán Saenz Cortés points to OXFAM’s research “Crisis and Capture: Social discontent in times of pandemic in Latin America and the Caribbean,” as it identifies work agendas for rethinking the social contract. Some, Saenz points out, are very obvious: democratizing democracy, rethinking the logic of financing democracy and defending civic space, rethinking international cooperation towards a more participatory and open model, new tax agreements, recording wealth, or putting an end to tax havens. In this sense, he highlights three elements or gaps: political, economic, and gender. 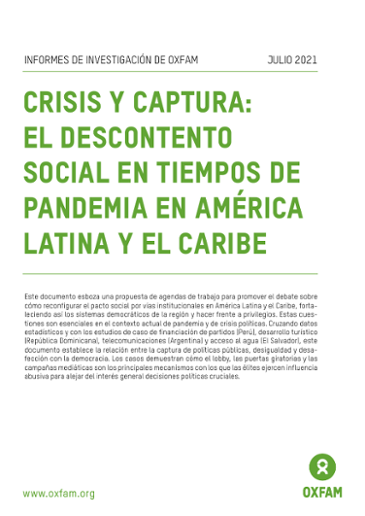 Roman Yosif C. (Laboratorio de Gobierno) highlights Public Innovation as a tool to put the person at the center and solve solutions with evidence. He points out that we are facing a more digital democracy. Innovation allows offering concrete solutions to public problems in the territories, which generate knowledge that can be replicated through Innovation Networks and help respond to very complex issues that need significant transformations. He points out that it is necessary to think long-term with results in the short-term.

Beth Simone Noveck (The GovLab) answers with the example of the City Challenge project, developed in 5 Mexican cities, aims to define challenges for which solutions are needed using the knowledge of the communities to provide solutions with the residents. She also shows how Indian research projects have been funded to lower the rate of tuberculosis and other diseases through a network of collaborators who have conducted multiple clinical trials based on existing or previously approved drugs in the country.

Kevin Casas (IDEA) argues that citizen trust in government is fundamental to achieving an effective democracy. He indicates that, due to the magnitude of the crisis and the speed it has had to be faced, many countries have centralized public policies and concentrated power in the central government. That is not necessarily bad, as long as the government looks after its citizens and not particular interests.

The role of citizen participation in local governments

Hernán Saenz Cortés (OXFAM) points out that it is necessary to understand that all state capture is relevant, As inequality has a multidimensional logic. He emphasizes that it is at the local level where there is the best possibility and responsibility to generate legal agendas that allow the creation of democratic agendas “to the square meter” for decision making. He points out that participation is essential, but it cannot be romanticized or linked to a single political party. He points to political counterweights, the concentration of power, separation of powers, and social networks for participation.

Roman Yosif C. says that from the challenges they have addressed in the Laboratorio de Gobierno, they realized the usefulness of hybrid digital and personal decentralization strategies. A decentralized network allows to systematize knowledge and massify it. He points out that the challenge is to reach the whole country. Therefore, they offer “toolkits”m refined and tested, and try to attract new people, with new skills, to identify problems and seek specific solutions, focusing their work and not on bureaucracy. Finally, he stresses that multilateral organizations have an essential role in mainstreaming innovation, sharing standards for innovation, and generating indexes that measure public innovation and make it possible to identify gaps and cross mentoring. 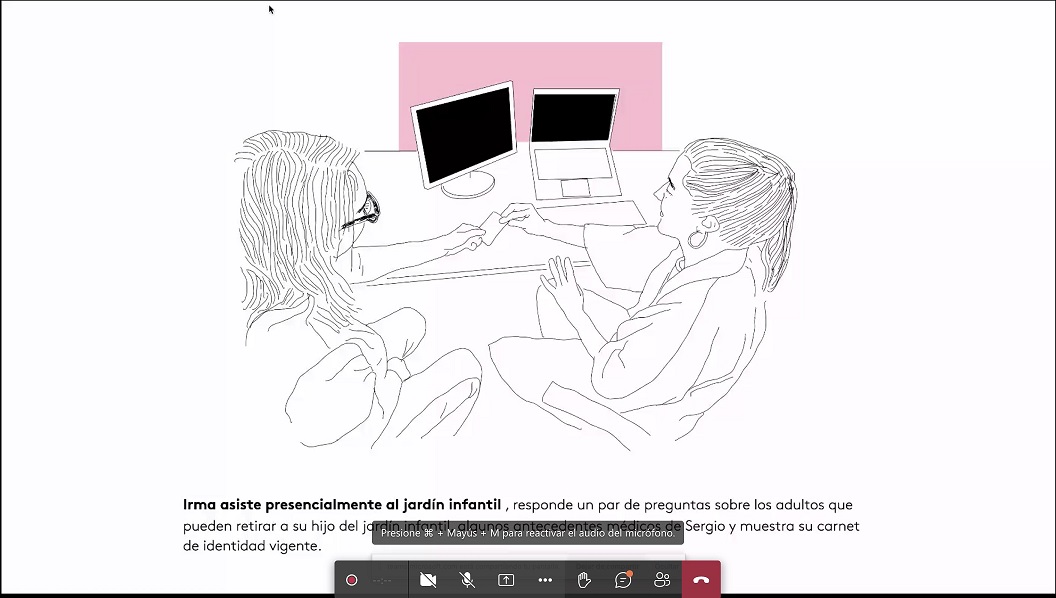