Perceptions of corruption levels worldwide have stagnated over with no significant improvement in any region. 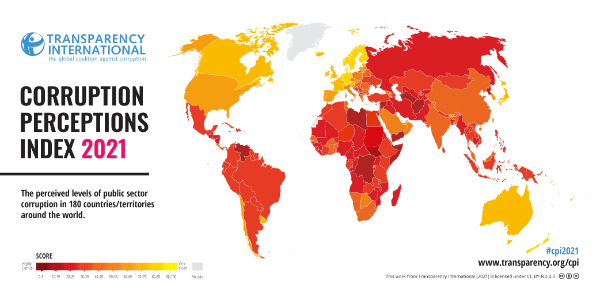 Transparency International (TI) has presented the 2021 edition of the Corruption Perceptions Index (CPI). It records the opinion of specialists, financial risk analysts, academics, and business people regarding public sector corruption in 180 countries. They use 3 data sources drawn from 13 different corruption surveys and assessments.

The Index establishes a ranking in which a higher score indicates a lower perception of corruption, with 100 being the best possible rating. Denmark, Finland, and New Zealand are at the top, with 88 points, respectively. At the bottom of the list are Somalia and Syria, with 13 points each, and South Sudan with 11 points, which repeat the lowest scores in the index.

Attacks on human rights and problems in the pandemic management.

The report notes that countries that are more complacent in the fight against corruption tend to violate human rights and undermine democracy equally. As rights and freedoms erode and democracy weakens, authoritarianism advances, contributing to further corruption both in countries with weak institutions and established democracies.

It indicates that if governments continue to use the pandemic of corruption to erode human rights and democracy, corruption could worsen faster.

According to TI, perceptions of corruption levels worldwide have stagnated over the past ten years, with no significant improvement. Eighty-six percent of countries have remained the same or worsened their ranking over that period. 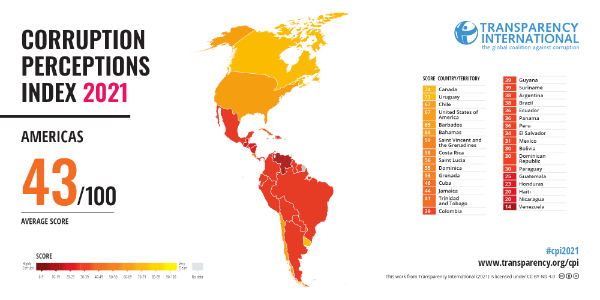 The Americas region, with an average score of 43 out of 100 for the third consecutive year following, is following this same course. Efforts are insufficient despite extensive legislation and a regional commitment to control corruption (Lima Commitment, 2018). More than eight countries in the region have dropped more than 5 points in the last decade.

El Salvador (34) has been singled out as a country to watch, as it “could consolidate as a dictatorship if it continues to undermine democracy, persecute critical voices and restrict civil and political rights.”

Uruguay stands out with 73 points, consolidating itself as one of the best-positioned countries in the region. Paraguay has increased 6 points since 2014, and Guyana scored 11 points more since 2012.

Colombia has a score of 39 out of 100 and is placed 87th out of the180 countries analyzed, maintaining position and score in the ranking. There are no significant improvements in the country; on the contrary, the regional analysis accompanying the Index points to serious excesses in the use of police force during demonstrations in 2019 and beyond and violations of the rights to mobilization, participation, and protest.

A call to action.

Transparency International makes a call to the public, which we join from Datasketch, to demand governments to fulfill their commitments against corruption and in defense of human rights based on four recommendations that we reproduce below: