Until The Truth Is Found - Data Journalism #20

This issue presents how investigative journalism innovates and keeps a watchful eye on crime, law enforcement abuses and attacks on human rights. 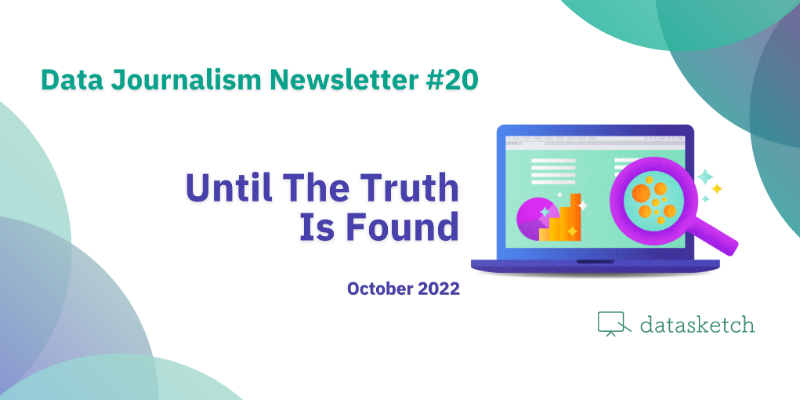 This issue presents how investigative journalism innovates and keeps a watchful eye on crime, law enforcement abuses and attacks on human rights.

38 of the 50 most violent cities in the world are Latin, according to the latest report of the Citizen Council for Public Safety and Criminal Justice.

This crisis has various reasons and manifestations. The CONNECTAS media, for example, reveals that one of the patterns that stands out the most is that the state weakness of the region (es) allows big criminal organizations to become de facto powers.

In the last few days, two news reports have resounded, which directly impact the exercise of freedom of the press in Mexico:

Since 2015, the DIG Awards have been awarded annually to the best journalistic inquiries in the world. The 30 finalists are selected from more than 400 submissions. Most of these reveal details about war financiers, mercenaries, dictatorships and other stories of human rights violations and state violence.

The winners of the last edition explored cases such as the Wagner group, a paramilitary organization, and its possible links to the Russian state; the inconsistencies in the Bugaled Breizh ship accident, which has been unsolved for 18 years; and the narration of the last hours of the government of Zine El Abidine Ben Ali, whose dictatorship collapsed in 2011 with the beginning of the Arab Spring.

From October 26-29, the LATAM Digital Media and Journalism Festival will be held in Mexico City. Distintas Latitudes organize it. The event will have guests from different countries to share experiences on storytelling, monetization, project management and audiences.

Our COO, Edu Martín-Borregón, will be one of the panelists at the Festival. Along with Laila Abu Shihab and Patricia Mercado, they will discuss the challenges of moving from journalists to media managers and entrepreneurs.

To keep on the radar

Thanks for reading this issue!