Is Democracy in Crisis? - Data Journalism #21

In this issue, we talk about democracy, a form of organization in which sovereignty resides in the people, who elect their representatives through the vote, which is increasingly threatened. 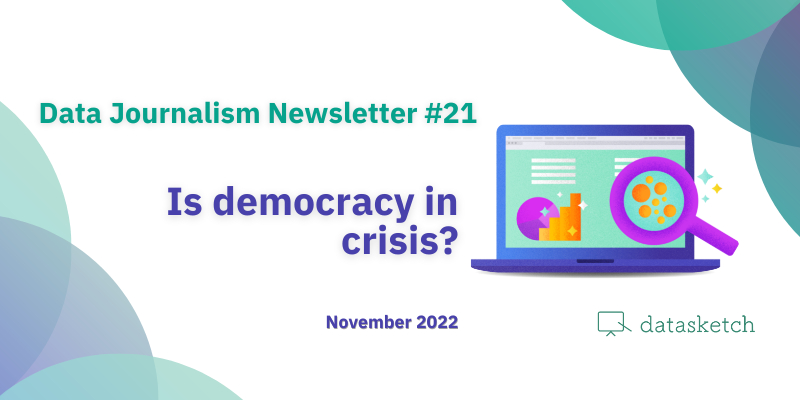 In this issue, we talk about democracy, a form of organization in which sovereignty resides in the people, who elect their representatives through the vote, which is increasingly threatened.

What does the data say?

International measurements such as The Economist’s Democracy Index or the International IDEA’s State of Democracy Index warn about the rise of authoritarianism worldwide due to the pandemic and the economic recession that some countries suffer. They point to increased repression of rights, such as freedom of expression, and weakening of the rule of law.

However, not everything is negative. Protest and civic action are on-going and defy repression. Some social movements emerge and sustain themselves as a spontaneous response against the abuse of power by state forces. Others base their actions on data, evidence and predictions, such as those mobilized to address climate change, with multiple proofs. For these cases, from Datasketch, we are preparing a data-driven advocacy guide, which will be published soon.

Elections: yes or no?

Several countries whose democracies have been considered examples of good governance are currently unstable. This is the case in countries such as the United Kingdom and the United States. Pandemics, inflation, recession, or active wars make this a critical point at which the future of democracies in the world may be defined.

🇬🇧 The United Kingdom is ranked number 18 among the countries with the best democracies. It has already had three prime ministers this year, but none have been elected through general elections due to the country’s parliamentary system.

🇺🇸 In the United States, one-third of the Senate and the House of Representatives will be renewed on November 8. These elections are crucial, as they redefine party control in Congress and support - or not - for Biden. Some of the issues they will face are the US position on the war in Ukraine or Trump’s willingness to return to the presidency, despite having the subpoena to testify in the investigation into the assault on the Capitol.

🇧🇷 Brazil experienced an election marked by the radically opposed positions of its candidates and by a division, as shown by the electoral data, with a victory obtained with a difference of less than 2%. Lula has 50.90% of the support against Bolsonaro’s 49.10%. According to a Brazilian Institute of Geography and Statistics report, the new president faces a country that reached 23.7% of poverty in 2021 and an unemployment level of 9.3% for the second quarter.