The Spaces that Women Have - Data Journalism #22

In this issue of the newsletter, you'll learn about a campaign for a safe website for women, we'll tell you about the State of Data Journalism 2022 survey, and we'll talk about short-lived millionaires emphasizing female representation. 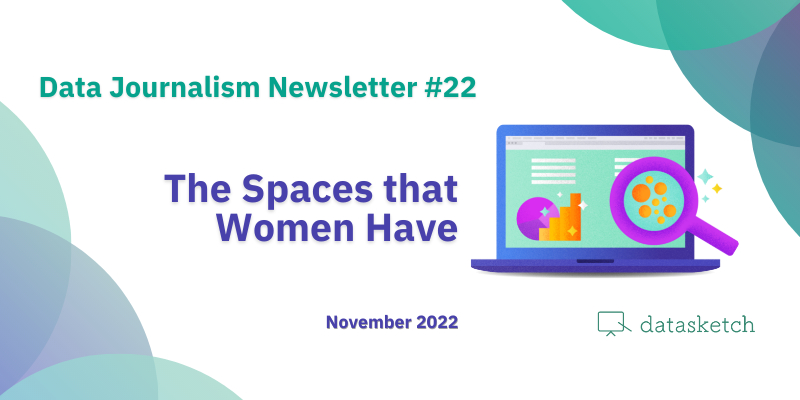 In this issue of the newsletter, you’ll learn about a campaign for a safe website for women, we’ll tell you about the State of Data Journalism 2022 survey, and we’ll talk about short-lived millionaires emphasizing female representation.

This month’s open government, culture and data journalism newsletters have a segment to expose some initiatives that seek to eradicate violence against women. To subscribe to the other newsletters, please write to newsletter@datasketch.co.

In this issue, you will learn about a campaign for a safe web for women; we will tell you about the State of Data Journalism 2022 survey and some short-lived millionaires emphasizing female representation.

A web free of violence against women

Female journalists are often exposed to harassment on social media because of reactions to their work. Hence, violence-free online environments not only have an impact on women’s well-being but also their work and access to information.

According to the report, tech companies do not have open data on their commitments, make decisions from the Global North with limited audiences in mind, have little expertise in online violence or it is not a business priority. However, women and people from the Global South are among the most active in networks and companies receive more pressure to regulate violence, which impacts their activity and revenue and leads them to take responsibility.

The data of the people who work with them

The State of Data Journalism 2022 survey is now available. It’s your chance to get the word out about the current situation of those working in the field and their challenges. But, for now, check out the 2021 results, which was the first edition. By that time, only 39% were women and worked as freelancers, as opposed to 59% corresponding men, with leadership or editorial positions.

✅ Participate in the survey

The ephemeral millionaires of the pandemic

The fortunes of some entrepreneurs grew during the pandemic but also vanished with the return to normalcy. Bloomberg analyzed its billionaire index data from seven business categories, including remote work, vaccines and e-commerce. 58 of the world’s 500 richest people achieved their wealth because of the pandemic, and their fall is on par with the 2008 financial crisis or the Great Depression. Only two of these people are women: Falguni Nayar and Denise Coates.