In this issue, we show you resources on feminist AI, integrity in public procurement, and effective whistleblower protection, which enable universal access to information. 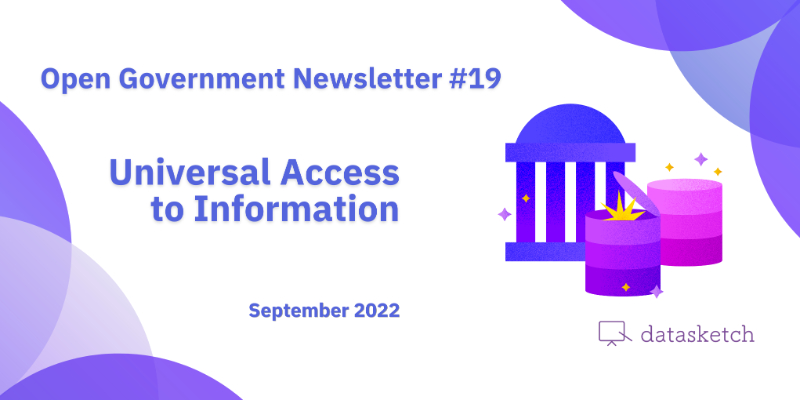 Did you know that UNESCO declared September 28 as the International Day for Universal Access to Information? Each year, the organization sets a theme for the World Conference, and for 2022, it will be “Artificial intelligence, e-government and access to information.”

With those themes in mind, we present resources on feminist AI, integrity in public procurement and effective whistleblower protection in this issue. In addition, Open Americas is just a few days away and will be the opportunity to discuss access to public information on the continent. See you in Santo Domingo?

Public procurement accounts for 15% of the world’s gas emissions. That is why Open Contracting Partnership (OCP), Spend Network and PUBLIC created an open, data-driven and inclusive toolkit for sustainable public procurement. The tools cover the formulation, implementation and evaluation phases of local procurement, considering the lifetime cost of products.

The Global Index on Responsible Artificial Intelligence is a research project that assesses advancement in the ethical use of AI in more than 120 countries. The project conducted a workshop on feminist AI in the Global South. It promoted accountability in AI from a gender perspective and leveraged the Index in feminist initiatives in Africa, Latin America and India. While AI is not neutral, this event seeks to give it gender and local focus.

Whistleblower protection is an issue of recent legislation worldwide, but the laws are not getting the job done. On the contrary, they may put whistleblowers at greater risk than before.

In Spain, 25 organizations issued a joint statement (es) calling for improvements to the Proposed Whistleblower Protection Law. This has a reduced and poorly defined scope, which does not assume the “reasonable belief in the veracity of the information” or the types of retaliation, prioritizes reporting channels instead of leaving them to the whistleblower’s choice, and has time limitations for protection.

If the proposal remains unchanged, it could discourage reporting regulatory and anti-corruption violations.

We are counting down the days to participate in Open Americas! This year it brings together Abrelatam-ConDatos and the Open Government Partnership (OGP) Regional Meeting. It will take place between September 26th and 29th. Are you going to participate? Several people from the Datasketch team will be in Santo Domingo. We will have a stand with our products and we hope to share with you to think about new projects together.

To keep on the radar.

🗳️ September 15 was #InternationalDemocracyDay. Let’s look at 4 resources to find out what’s going on in the world | Datasketch on Twitter

♿ Inclusion in OGP: Analysis of commitments on people with disabilities, youth and the LGBTQIA+ community | Open Government Partnership

See you next time!