In the world of visualization there are many different faces: developers, inventors, mathematicians, designers. Santiago Ortiz is probably one of those characters that represents all and none of those at the same time.

In the world of visualization there are many different faces: developers, inventors, mathematicians, designers. Santiago Ortiz is probably one of those characters that represents all and none of those at the same time.

As a mathematician, Santiago combines creativity with hard work and a pragmatic approach to transform the reality behind bits and pixels into narratives based on data.

In 2010, Santiago, as co-founder of Bestiario (a Barcelona based company that creates products and services to transform the way we interact with data) designed a system to enhance the data analysis and visualization workflow. With his learnings of those years combining mathematical and artistic patterns, in 2012 he embraced into a self discovery project of exploration and experimentation. If you are interested you can check the details in his presentation at Eyeo 2014  (watch video).

During those 6 months of experimentation he asked himself these questions:

Armed with these motivation and from different learning exercises he reimplemented his old framework (originally in ActionScript) in Javascript. Among those initial projects it is worth noting these 3: Iliad, Seven set Venn diagramm and Lostalgic 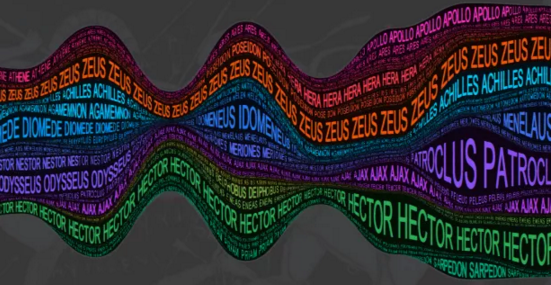 Venn diagrams show common elements of the sets being represented by intersections of the circles. We are more familiar with Venn diagramas when we have a small number of sets (2 or 3). Branko Grünbaum, after mentioning in 1975 that there didn't seem to exist a symmetrical representation for a 7 set Venn diagram, came up in 1992 with a non-monotonic and nice representation that Santiago finally used to make his interactive version.

The final version is done after depicting intersection areas with colors (instead of numbers), making sure that colors would be equidistant in hue. 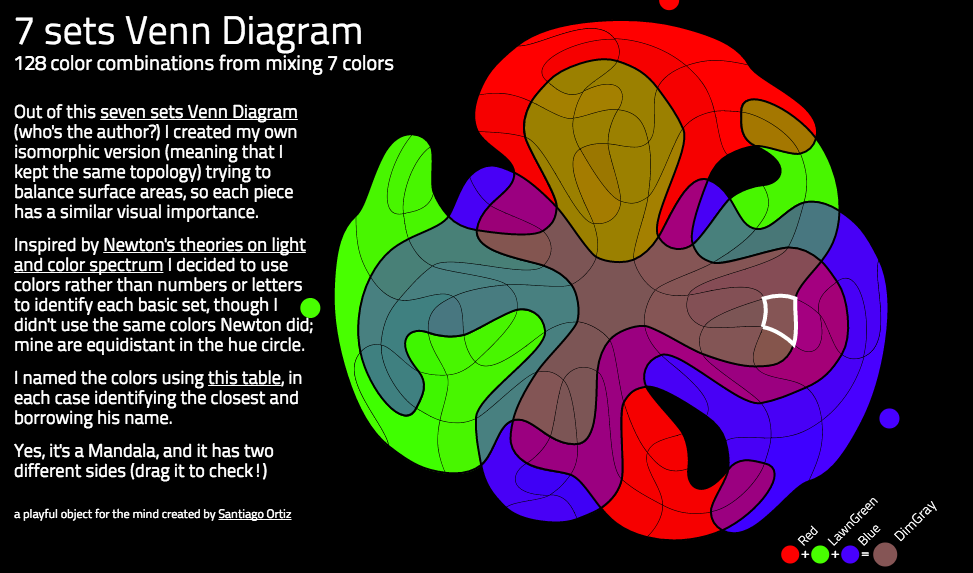 The once famous TV show Lost is being revived by Santiago with this interactive piece. It allows users to explore character's dialogues in 115 episodes along 7 seasons. The data was harvested from Lostpedia. This is a very innovative work that shows a very different way to interact with content displayed originally on TV. There are different controls to see relations among characters and reconstruction of each episode can be explored as a constellation with a linear flow for each scene.

After his exploration journey Santiago has participated in bigger projects with Twitter and The Economist. His portfolio, available at his home page (http://moebio.com) is a great inspiration for new projects. Now he is part of Red Drummer, a Brazilian company of dynamic data visualization from which he continues fascinated by different patterns that represent the complexity in our world. This complexity is pushing his boundaries and empowering him to abstract more and more the workflow for representing reality as information.

Juan Pablo is a data scientist. His work in computational statistics has been applied in fields like macroeconomic analysis, hydrology and data journalism.